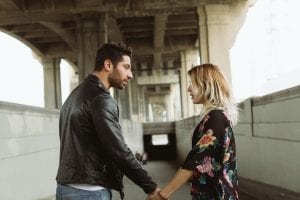 ROCD is related to Obsessive-compulsive disorder – a debilitating mental disease where one’s thoughts and urges become obsessive. These thoughts, ideas, and urges are unwelcome and could lead to a person experiencing unwanted emotions like shame, guilt, or fear. Anxiety stems from these unwanted emotions, which lead the person to engage in specific behaviors in order to alleviate these emotions and the anxiety that it brings.

Obsessive-compulsive disorder has a variety of obsessive themes. These themes include contamination fears, fear of harm to self or others, and scrupulosity – which involves religious and moral obsession. Each of these themes usually has a corresponding compulsive action that the person engages in so as to alleviate any anxiety caused by the obsessive thoughts, ideas, or urges.

Recently more and more attention has been given to a “newer” obsessional theme – romantic relationships. Relationship obsessive-compulsive disorder involves obsessive-compulsive symptoms (much like OCD) where the focus is on intimate relationships. ROCD is becoming more and more popular as the topic of discussion as well as scientific research. This subcategory of OCD could create significant distress for a person and their relationship; it could also impair functioning in other areas of the person’s life.

Usual worries or concerns will inevitably arise in romantic relationships. Thoughts around whether you and your partner are compatible, whether you have the same values, and envision similar futures are all normal things that couples think about.

While it is conventional and natural for most people to have these kinds of doubts about their partner or their relationship, ROCD involves thoughts and ideas that become obsessive. These thoughts, ideas, and even urges are present regardless of whether there is conflict in the relationship or not. They are also often experienced by people who rationally know that they are happy in their relationship. These obsessions are irrational concerns that creep in and cannot be ignored or appeased.

The obsessions and compulsions inevitably start to take over the individual’s life and become the full focus of their attention. In the end, this person struggles to lead a happy and fulfilling life. In the case of ROCD, the person will unlikely experience healthy and fulfilling relationships as they are constantly bombarded with debilitating doubt regarding their choice in partner and relationship.

People experience ROCD differently. Some Feel like they need to break up with their partner, even when they are happy in their relationship. Other individuals might spend months or even years, consistently questioning their relationship and engaging in obsessive thinking.

What is Relationship OCD really

Relationship-centered and partner-focused ROCD symptoms can occur simultaneously, and they could even bolster each other. For example, obsessions about the perceived flaws of a partner could lead to the individual questioning the relationship and whether they are with the right person. It could also be the other way around where someone questions the relationship and then start to fixate on the flaws of their partner, although this occurs less often.

Relationship-centered and partner-focused obsessive-compulsive symptoms are likely to co-occur . More than that, they tend to fuel each other. Partner-focused obsessive-compulsive symptoms could lead to increased relationship-centered symptoms a few months later, and vice versa. ROCD symptoms could also spread to the romantic partner . This could lead the couple into a cycle of experiencing ROCD symptoms if it is not treated.

Compulsions are the behaviors or actions that an individual engages in in order to compensate for their obsessions. They usually engage in these activities in order to reduce the panic, anxiety, or guilt that stems from the obsessive thoughts. There is an extreme sense of urgency to address the uncertainty and to decrease the distress that is being experienced. This leads to a repetitive cycle as the compulsive behaviors reinforce the obsessions and dot relating to the relationship.

ROCD symptoms often appear in early adulthood and could affect most of the individual’s romantic relationships. For some people, ROCD symptoms only start when they faced a crucial romantic decision like getting married, moving in together, or having children.

ROCD symptoms aren’t necessarily only experienced while a person is in a relationship; they could also be experienced based on past relationships or even based on obsessions about future relationships. These obsessive symptoms could manifest as someone engaging in self-reassuring behaviors (like reasons for breaking up), compulsive comparisons (like comparing their ex with a current partner), and compulsive recollection of past experiences (like fights).

ROCD symptoms are unrelated to the length of a relationship and the gender of the person.

Both relationship-centered and partner centered obsessions are associated with compulsive behaviors. These behaviors are conducted in order to reduce anxiety, distress, uncertainty, or the frequency of the obsessive thoughts. Compulsions could include consistent monitoring and questioning their own feelings and thoughts and comparing their relationship to other people’s. People with ROCD could compare their relationship to those of their friends and colleagues. This is especially prevalent with increased exposure to social media. Even more than that, they could compare their relationships to those of fictional characters in films and books.

To date, there are no diagnostic criteria for Relationship obsessive-compulsive disorder listed in the fifth (and most recent) edition of the Diagnostic and Statistical Manual of Mental Disorders (DSM-5-V). There are a number of common obsessions and compulsions observed in people who experience ROCD.

Common obsessions that could be encountered includes:

Corresponding compulsions could include:

Currently, two measurement tools can be used to identify whether someone has ROCD – and to what extreme they experience it. The Relationship Obsessive-Compulsive Inventory (ROCI) assesses relationship-centered obsessive-compulsive symptoms, while the Partner-Related Obsessive-Compulsive Symptoms Inventory (PROCSI) assesses partner-focused obsessive-compulsive symptoms. Both of these measurement tools work on a continuum – that means that they are able to indicate how mild or severe the symptoms are.

How to overcome Relationship OCD

If the symptoms cause significant distress and are devastating to the person, it would be classified as ROCD instead of usual doubts or worries about the relationship. In this case, psychological intervention is recommended.

Treatment would include an assessment and the gathering of information as well as identifying the client’s symptoms. The therapist and client will explore and determine which beliefs and views stem from the individual’s ROCD symptoms and which are normal doubts or caused by other life problems. People who experience ROCD symptoms often only seek treatment when they experience instability in their relationship. ROCD often co-occur with other conditions like depression, anxiety disorders, and other obsessive-compulsive symptoms, and this makes it difficult to diagnose. Therapists will likely test for other co-occurring conditions in order to rule them out before initiating treatment.

Treatment involves cognitive-behavioral treatments similar to those used for the treatment of OCD. An essential part of the treatment for people with ROCD is that they need to recognize that they have these symptoms and that the symptoms are interfering with their relationships.

Cognitive-behavioral therapy and experiential techniques (which could include imagination-based exposures) could be used to understand and challenge the individual’s beliefs that stem from ROCD. Through this practice, they can work at reducing their compulsive behavior.

Other cognitive-behavioral interventions could address the dysfunctional thinking patterns, self-perceptions and fears, and defenses related to attachment. Furthermore, psycho-education could be beneficial. This form of treatment involves educating the individual on the treatment process and how their symptoms influence their decision making as well as an explanation that emphasizes the differences between obsessive thinking and normal problem-solving.

Therapy should also explore how a person’s ROCD symptoms could affect how they experience their feelings about the relationship. It might be beneficial to involve the person’s partner in therapy sessions to educate them, to screen them for symptoms and symptom accommodation, and to provide them with skills to help their partner and avoid the development of ROCD symptoms.

Some selective serotonin reuptake inhibitors (SSRIs) – often used as antidepressants might be an option for some individuals.

Differences between ROCD symptoms other conditions

In contrast to this, worry is linked to the potential consequences of actual situations and are often focused on the future.

People who experience relationship-centered obsessions tend to be preoccupied with how they perceive their relationship and their thoughts, feelings, and experiences around it and is usually experienced as ‘present’ thoughts. On the other hand, individuals who experience social anxiety tend to be concerned with what other people perceive about them. These concerns could be about the past, the present, or future encounters.

Partner-focused OC symptoms are recurrent thoughts relating to a partner’s perceived flaws. These could be physical attributes, but could also include social qualities and personality traits.

Both of these disorders (partner-focused OC symptoms and BDD) include an intense awareness of the partner’s flaws and the idea that the perceived flaws are appalling or could lead to disastrous outcomes.

While these symptoms relate to different disorders, individuals who exhibit symptoms of body dysmorphic disorder could have a higher risk of developing more person-related obsessive-compulsive symptoms .

It is natural to have concerns and doubts about a relationship – especially in the beginning stages and when steps to more significant commitments are being considered. If, however, these concerns are persistent, unwelcome, and become obsessive, it might be early indications of the development of relationship obsessive-compulsive disorder. In addition to obsession and urges, individuals will engage in compulsive behavior in order to decrease the anxiety and distress that the obsessions create.